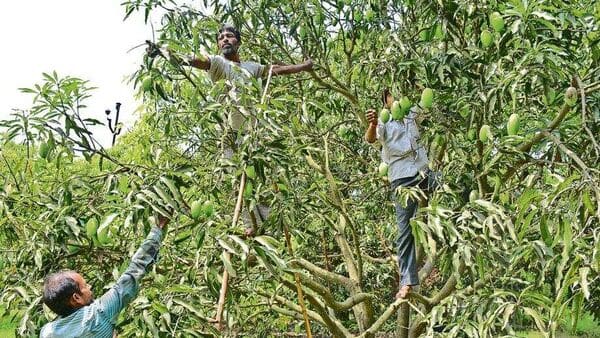 In Uttar Pradesh, the most important mango growing region in India, mangoes start flowering in February. When the temperature reaches 30-32 degrees Celsius, the white flowers turn into small green stones, which then become fleshy yellow fruit.

This year, Ali said, the flowers on most of the trees in his 40-acre garden have not turned into fruit; Or the raw green mangoes fell off as the temperature rose. “The heat wave in March destroyed crops,” Ali said The loss was Rs 50 lakh this year 30 lakhs.

Mango is inseparable from the Indian summer experience, its sweetness is the reward for intense heat. With about 2.2 million hectares of land under mango production, this crop is an important source of income for farmers. According to the Ministry of Agriculture, India produced 20.38 million tonnes of mangoes in the 2019-20 crop year (July-June).

Farmers in a wide geographical region from Uttar Pradesh to Gujarat to West Bengal to Tamil Nadu grow 20-25 commercial varieties of mango. But with the exception of Maharashtra, mango production has been in crisis in all other regions due to erratic weather conditions since last winter.

“Total mango production is projected to decline by 40-45% this year as compared to last year,” said a scientist at the Indian Institute of Horticultural Research (IIHR), Bangalore, who declined to be named. As a result, mango prices have skyrocketed 30-150 per kg in the local market last year 80-300 per kg this year.

In the regular year, April begins the mango season which lasts till October. But wild weather experts have predicted. At this time in some parts of the country, the mango season may last longer, but the difference in production prices will remain, experts say.

“Over the last four-five years, erratic rainfall has affected mango production in the country, especially in South India,” said IIHR scientists. The weather. “

A good mango season requires the right temperature at the right time. थंड Cold and dry weather in October-December for flowering; And moderate heat around March to ripen green fruits. Last November, unpredictable rains replaced cold and dry winds with moisture in many mango growing areas of India. The flowers either withered or stopped flowering.

In South India, torrential rains disrupted flower cultivation, while Hurricane Asani left a trail of damage to the west. “Many trees were uprooted by the strong winds of the cyclone. Those who survived lost all their raw mangoes, “said Akshay Gajera, a farmer and supplier of Gir Kesar mango varieties. Most of the trees lost by Gajera were 40-60 years old.

Mango seedlings take time to mature. It often takes 3-4 years for them to bear any fruit; And they reach maximum productivity in the age group of 12 to 50 years. Damage to trees in their prime is likely to increase in the next few years. For farmers like Ali, in northern India, the March-April heat wave has brought crops. Uttar Pradesh, one of the leading mango growers in India, produces an average of 40-45 lakh metric tonnes of fruit every year.

“This year, production has dropped to 6-7 lakh metric tonnes, affecting all the 14 mango belt in Uttar Pradesh,” said Ali, who is also the president of the Mango Growers Association of India. “More than 60% of the mangoes have already been harvested. And there is not much left on the trees. This year, the North Indian mangoes will soon disappear from the market.”

The decline in quality affects the mango market, as well as the processing industry that consumes fruit in pickles, jams and chutneys. “Processing machines in the industry are made for specific sized mangoes. When the size of the mango is erratic and does not conform to the standards of the machine, the whole processing chain is disrupted, “said Raunak Gokhale, who works in the mango processing unit at a beverage company (Parle Agro in Mumbai) and is currently the policy head of CNH Industrial. Which manufactures agricultural machinery.

The processing industry prefers mangoes with thick fleshy pulp, thin skin and small seeds. Totapuri mango from Karnataka ticks on those boxes and is preferred in the soft drink sector. “But the production of Totapuri has come down by almost 30% as compared to last year. Lower production and rising costs will increase the cost of labor and agricultural inputs by 40-50%, ”Gokhale added.

Small businesses are mainly involved in making mango pickles, jams, jellies and other processed foods. Gajera warns that given the rising prices of mangoes, small businesses may find it difficult to sustain themselves.

Untimely rains not only impede the growth of flowers or fruits but also invite pests. “Moisture in the air attracts pests to attack crops,” said a horticultural scientist. As a result, farmers have to spend more on pesticides and increase their production costs. But using chemicals alone to kill pests is not the answer, he explained. Rain often washes away pesticides, making them ineffective.

Each season, government extension officers and scientists advise farmers to use the drug at different stages of mango production एक one during flowering and the other during fruit growth. But when plants, fruits and flowers grow together in an effort to adapt to changing weather signals, farmers are confused about which methods to adopt. This also increases the cost of orchard management. “We are witnessing a complex problem, with no clear answers,” said the scientist.

Ali said the challenge was exacerbated by pesticide adulteration. “We have often told the authorities about the counterfeit chemicals available in the market, but we have not been able to find any solution,” he said. Researchers have suggested that the market for counterfeit chemicals in India is growing at a rate of 30 per cent. If the plants were given the right dose of medicine, the losses to farmers could be reduced, Ali said.

Some scientists say that everything is not lost. Mango season is long in India, some varieties are harvested in September-October. This year, that timeline may be different. Mango may be available in the market for a long time. This is the hope of IIHR scientists. “Farmers could make a small profit in the next few months.” But farmers like Ali have been facing difficulties for a long time now. “Many of the trees in the mango orchard are over 90 years old. Like our humans, these trees lose their productivity after a while.”

For example, it is a myth that all mango farmers kill in summer. Early season mangoes like Alfonso in Maharashtra often fetch good prices. “This is the first mango of the season and mango lovers are often happy to pay a premium price.” But mangoes from North India are often sold in the market, which keeps farmers at a lower price, Rajan explained.

The export market is also not a solution for many reasons. Rajan said, “It is a common misconception that all Indian mango varieties are offered for higher income.

India is the world’s largest producer of mangoes, accounting for more than half of the world’s production. But when it comes to exports, it lags behind – not even in the top five (Thailand, Mexico, the Netherlands, followed by exporters and Brazil). India exports less than 10% of its production, but most of it goes to countries with large Indian diaspora. Rajan said, “Most mangoes are shipped to countries like Dubai, South Arabia, Middle East, UK. Recently, there has been an emphasis on finding markets in the United States. India exported 21,033 metric tonnes in 2020-21. Fresh mangoes, worth 271.84 crore, agricultural and processed food products, according to the Export Development Authority (APEDA) – Kovid has exported 49,658 tonnes in 2019-20.

Extremely perishable goods like mangoes are often difficult to transport. It takes a long time to send them by sea to high-paying export regions; Air transport is very expensive. Far from the coast like Uttar Pradesh, mango growing areas often sell their produce in the domestic market. Mangoes grown in coastal areas, such as Bayanganapalli and Alfonso, are exported to the southern and western varieties.

Taste is also an issue. “The sweetness of Indian mangoes is higher than mangoes from other countries like Brazil or Peru, which are preferred abroad. Beyond that, phytosanitary standards (which require low presence of chemical residues in the product) keep Indian mangoes away from exports, especially from the European market, “said Rajan.

Traders fear that the level of exports will fall further due to low production and rising domestic prices.

Ali and several other organizations have asked the government for crop compensation, but no assurances have been received. “Like wheat or rice farmers, we need some relief from the damage caused by the weather,” Ali said.

IIHR scientists agree: “Minimum support prices for commercial mango varieties can help farmers and the mango economy.” In addition, timely crop protection advice from the local bidding horticulture department should reach the farmers so that they can manage it. Good crop, he added.

He appreciated the role of APEDA in boosting exports by developing mango clusters across the country. Adopting good agricultural practices will also increase the demand for Indian mangoes in the international market, he said.

Ali, however, is at the end of his optimization. “Farmers want to cut down their trees and get out. There is no benefit (no use). We don’t know what else to do, but maybe we should look at other areas. Maybe factories should come here instead of trees. Let’s save some orchards for tourists, ”he said.